Back on the hill 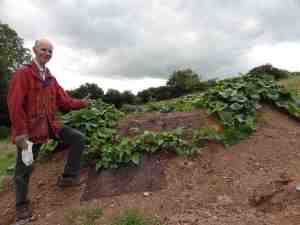 Thumbs up for Runner Beans

We went up to see how things were going on the hill after an enforced spell at home.

The mound is going from strength to strength with runner beans, leeks, french beans, squashes, carrots and cucumbers  all surviving and thriving. We harvested our potatoes which we grew next to the mound. The yield was poor, about a sack full,  mainly because I had put fabric on the rows with the plants poking through. The fabric restricted the amount of water reaching the plants with some even going to seed. Charlotte and Romano did best- better luck next year. 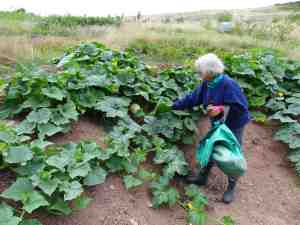 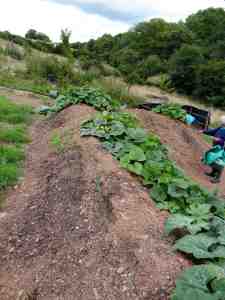 Veg on the Mound

A quick scurry up the hill to see how things were going.The water cube had dried up in the sun but following some rain its full again- lets hope we need it. 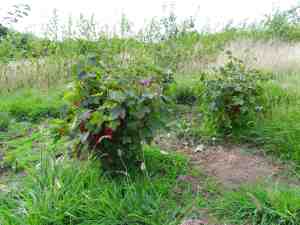 Apples on only one tree but we want the trees to strengthen up a bit more before they carry decent amounts of fruit.

A damson tree had two branches snapped off, I can only guess that crows or jackdaws have been after the fruit and became too enthusiastic. It seems that the birds have us on their menu as a fruit garden because the black currents have also gone.

Elsewhere trees have put on good growth even the ones that were nibbled by the cattle last year.

Clover in the guild

The guilds are hanging on in there with clover producing a good show plus  lavender, strawberries and even a lupin.

Strawberries in the guild

One last treat at the top of the hill was to see the pond, Team 157 put in, filling with water and resplendent with a water lilly. Lets hope the frogs like it! 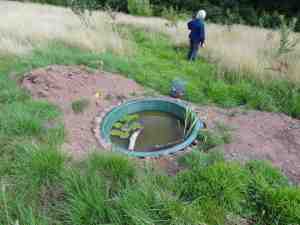 Lilly in the pond

1 Response to Back on the hill

Musician, Vocalist and Wheel Chair user with a Penchat for the Blues

Working in a Welsh Woodland

The latest news on WordPress.com and the WordPress community.